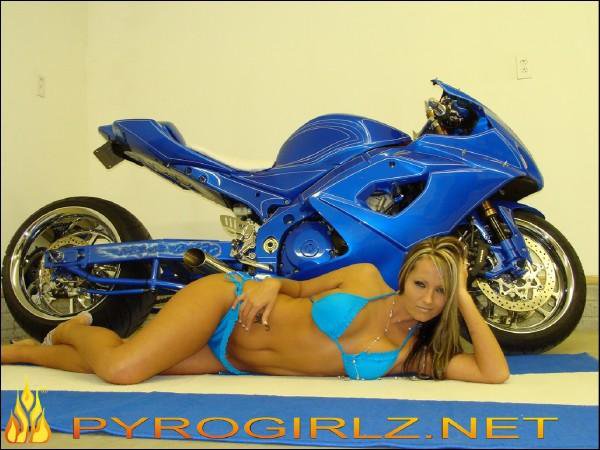 What a weekend! I’ve had a lot of people asking me about my truck and bike, so I figured I’d put it all out here.

The IX Center was busy this past weekend between the Cleveland Autorama and the Franchise & Business Opportunities Expo. The Expo went pretty well, I got to talk to some new people and our set up looked great. I spent a good amount of time over at the Autorama, showing off the work my friends and I put into the Suzuki 1000 and the C-10 Pick up. In case you didn’t hear already, the Suzuki took first and the C-10 placed second.

The Suzuki is referred to as “The Blue Bullet” around the shop. I bought the bike back in 2007 (it was an ’06) and it was red. Initially I bought it to add Turbo on it, but I never ended up doing that because I ride it too much and I wanted to keep the motor reliable. When I first got the bike I drove it over to my friends at The Bike Shop to have them strip the bike down to the frame.

I took parts over to my shop and transformed the bike from red to House of Colors True Blue pearl with a white base. I finished it off with some airbrush work and PPG Clear Coat. While I was painting, The Bike Shop was busy ordering the custom rear swing arm from Macintosh along with the Huge 330 rear tire kit. I wanted a good sound coming from the bike, so I added a custom Voodoo exhaust. We then added air ride suspension. This suspension not only looks great—It rides great too.

The finalizing touches: the HID lights, custom seat, and quality sound. For anyone who wants better visibility at night: I highly recommend the HID lights. The custom seat is 100% unique to my bike. Matt Hanna, of our Interiorz division, hand stitched the seat. And as for the sound, The Bike Shop added their twist with a LED light kit, full i-pod radio set up with JL audio, and a custom spike kit for the entire bike. I’m going to caution you: the spikes are sharp! Looking back to 2007, this bike was really futuristic.

Moving on to my truck, the ’67 C-10, this truck has been a piece of work. But it truly is my pride and joy. The idea was to make this truck look opposite of my other truck (my everyday truck). My one truck is white with blue pinstripes, so I wanted to do the opposite with my classic: blue with white pinstripes.

The truck is the same blue as my bike: House of Colors True Blue. The truck has an entire Air Ride Technologies ride system that flips the truck every which way. This system is electronic. We added a brand new Chevy 350 for the power plant with a mild gear upgrade to the rear end and transmission.

I wanted the truck to be a show truck, but I still wanted to be able to drive it. Originally the truck was a ’72, and we overhauled it and turned it into a ’67 (the sleeker front end). We shaved and got rid of the door handles and added door poppers to get in and out with a push of a button. The entire truck was restored.

When I picked it up from the south, it was like new. No panels needed welding. The entire interior was completed by Matt Hanna of our Interiorz division. The seats are white leather with blue velour. We also added white carpet for detail. The inner door panels were painted to match the rims and stripe. We gave them a candy look. For the finalizing touch I wanted to be sure I could really grab attention: I added a couple train horns to wake people up at the shows (ha ha). I also added some A/C so the truck is even better to drive in the summer. I take it up to all the shows we attend. I’ll take it up to Goodguy’s again this year in Columbus.

I hope that answers everyone’s questions about my rides. I know a lot of people wanted to know the ins-and-outs of what I have done to it. I most certainly could not have done it without the help of my friends.